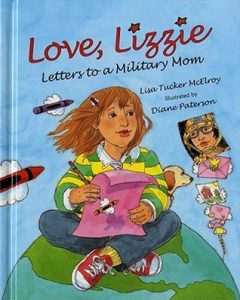 Another book I picked up at the library book sale was Love, Lizzie: Letters to a Military Mom. Written by Lisa Tucker McElroy and illustrated by Diane Paterson, it is an Albert Whitman & Company book, published in 2005.

The point of view character Lizzie is the daughter of a deployed military mother. Her father is home, as is her younger brother. Lizzie writes her mother letters. What I enjoyed the most were the spreads (two pages of a single illustration) that were Lizzie’s drawings. The letters were sweet, but those illustrations made the whole tale more poignant.

For example, she wrote about her little brother bugging her and her father saying she could create a hidey hole. While she wants to be able to hide from her brother, if her mother should arrive home unexpectedly, Lizzie definitely wants her mother to be able to find her. There is a very elaborate (in a kid-style drawing) bedroom spread. Her brother, her mother’s picture, and details of her room are represented–including the “spider that got in. Yikes!”

There is front matter by Sen. Dianne Feinstein. There is back matter, which are tips from Lizzie and her mother on how to handle an upcoming deployment.

In a city where the largest employer is the Air Force, this continues to be an ongoing issue for children in my neighborhood.

It is a delightful book. I recommend it.