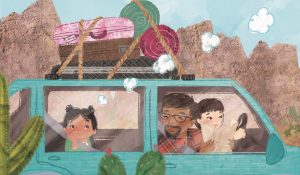 What Does It Mean to Be American? written by Rana DiOrio and Elad Yoran and illustrated by Nina Mata (2019) was an unexpected pleasure.

I thought the book would be treacle sweet, but instead it was thoughtful.

It was very much a “learn this lesson” book, which most publishers don’t want to publish, but since the author is the founding publisher of the press (Little Pickle Press, now March 4, Inc.), and the press was established for a specific social mission, this might be a good press for you, if you are writing lesson books.

How the authors describe what it means to be American, “following our dreams, and working hard to achieve them,” among other ideals, was moving. The biracial family are quintessential Americans, or so it appeared to me, until the plot twist towards the end of the book. It was a great and unexpected move.

The back matter is seven pages about introducing the concept of American to younger children, including information on documents and people that are relevant to the description given.