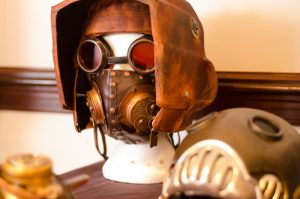 Years ago I attended a Writer’s Workshop at a conference. There are four exercises that a writing group of 20 years has found useful. I thought they were interesting.

For the Genre Bending exercise,  I was given eccentric wizard and steampunk Wild West. Those were both within my powers of imagination and I tried to use other ideas we had learned in the workshop as well. We had 20 minutes.

I turned eccentric wizard around and made it a level of wizard.

Aelfred had powers beyond mortal imaginings, which, he would tell you over a whiskey, “Is dashed boring!” Those days he was rarely seen except over a whiskey.

Then one Tuesday Aelfred not only disappeared from his front table at the pub but from the entire universe.

Mage sniffers, arcane regulators, and the wizard watch searched for clues in Vain and in every other place they could think of. But the wizard eccentric had simply vanished.

Aelfred, who had lifted his sifter for the 7000th snoot of whiskey that decade, jumped when his glass disappeared from his hand.

He was no longer sitting, but standing.

The air was redolent, not with the smell of regus flowers and the sea, but dirt and—Aelfred took another sniff—quite a bit of bone dust. He sneezed.

“Blaze you,” said a young red-haired man. At least Aelfred assumed that the stranger was a man and had said blaze you. He recognized neither clothing nor accent—and he had toured the universe before settling down 112 years earlier at the pub next to his workshop.

The table, of a medium hued wood with turned legs, much like his sister’s favorite gardening cart, though larger, was covered by a thing of metals—bronze, silver, and copper shone in curved edges, tubes, and circles that ended in square edges. It was like nothing Aelfred had ever seen in all his wanderings.

“What is that contraption?”

Ahm looked over her shoulder and once again her face colored. Aelfred noticed this change of coloration and decided it meant something, though he was unsure of what. He would suss it out later, though; she was answering.

“That is a negative positator,” she said. “It’s my own invention, based on the work of Professor Yomi of Japan….”

I quite like the tale I came up with, though I never finished it. In fact, I like it so much that I’m not putting more of it out to the public, because maybe someday I will figure out where and how to publish it so that others can enjoy it.