Plants hear the sound of the honeybee and up the sugar content of their pollen quickly.

Hadany’s team looked at evening primroses (Oenothera drummondii) and found that within minutes of sensing vibrations from pollinators’ wings, the plants temporarily increased the concentration of sugar in their flowers’ nectar. In effect, the flowers themselves served as ears, picking up the specific frequencies of bees’ wings while tuning out irrelevant sounds like wind. 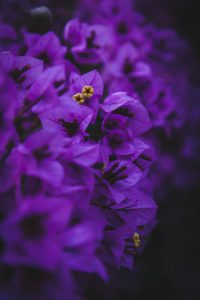 by Antonio Grosz via Unsplash

If there are no bees, the plant is shade or ground cover.

Octopi and squid change colors to communicate. If eye color is related to emotion, what would the drawbacks be?

Farscape has touches of biotech. Slug cleans teeth while humming. There is an animal to translate languages.

Color of Difference by Amy Thompson has aliens bio tech

I attended FenCon 2019 and went to a couple of panels by science fiction and fantasy authors that I thought had useful information for writers. One of those panels was Extraordinary Creatures. I separated out biotech because it seemed to be taking my thoughts in different directions.